This is a picture of Whitehead Street in Key West. This is a picture of the"old world" where my ancestor's lived back before the houses were all painted so pretty in white and when the poinciana trees were not as big as they are now. I'm not even sure the bougainvillea was there then. Key West in the "old days" looked a like the old west. 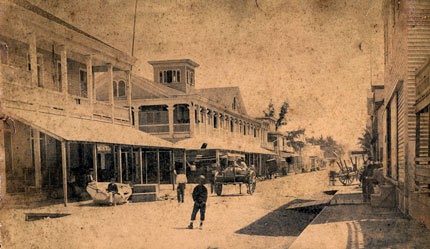 The little boy with attitude is my Uncle Jake. A photographer came to town in the late 1880s and he followed him around watching the man setting up this thing called a camera and like any good Huckleberry Abrams he ended up being in the pictures. My Great Grandmother Ida and her husband Wolfe worried he was bothering the photographer, but the photographer told them it's good to have subjects in street scenes so he let Jake and sometimes his younger brother Morris pose in the scenes. As a present of thanks the photographer gave his parents a copy of one of the photos of him standing near Mallory Docks where they were harvesting turtles. The man behind him may or may not be my Great Grandfather Wolfe. My hazy memory is that my Aunt Ada said it was and you can see him if you look carefully protectively holding the hand of the little boy behind Jake. 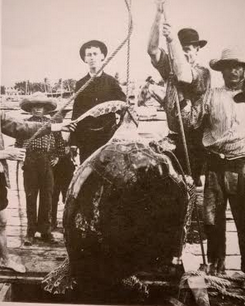 He's well dressed and definitely not fishing for turtles. Aunt Ada, who is named after her Grandmother Ida/Ada, said she believed that was their father. Makes sense.. If you look carefully the boys are dressed the same. Jake was older and the product of Ida's first marriage back in the real old country. Her husband died before even getting to the battle front in Russia leaving her a young widow and I do mean young. She met Wolfe in England when she accompanied her father a Rabbi who was working in a Shul there as a Cantor and visiting "relatives" and the rest is the story legends are made of . ..

Wolfe told her he would take her somewhere that it was "always warm" and there was "lots of water" obviously two things they had in common beyond getting away from Russia during the pogroms. They sailed away a year or two later into the sunset westbound with their new baby Jennie. They lived in Key West during the 1880s and 1890s. After the Spanish American war they moved their home to Tampa while still often in Key West on business.

Key West in the 1880s was becoming a prosperous city with immigrants from Cuba as well as Russian and Romanian Jews. Conchs from the Bahamas had lived there for some time and Greek sponge fisherman were beginning to encroach on the turtle farmers. Lots of old Southern folk who had winter homes there from the Carolinas such as the Lowes and the Porters who were so Southern they spent a good part of the Civil War (or War Between the States as my Grandma Mary called it) hiding a confederate flag from the Yankees who were located there trying to keep a blockade enforced.

Everything before Key West is hazy and unsure in my family tree. Ida had a father who was a Cantor, his name was Joseph.. or Yosef. Wolf was naturalized as Wolfe Abrahams but he eventually became Wolf Abrams. Confusinginly he used the names Abramowitz and Abramson, though officially he was Abrams despite one census in Tampa that has his name listed as Abraham Wolfe.

The problem I have and the point of this blog is to illustrate the search for the story before the story. There is a break in the branches that is not so easy to trace. It's common for American Jews and I'm betting South African Jews as well who made their way West towards freedom from pogroms and towards the dream of living in a land where opportunity existed for all people. They may have liked the concept of freedom of religion, however seeing it through their eyes they were just putting distance between themselves and the Czar and the ongoing persecution that was on the rise in Russia.

Note "Russia" could have been Poland, Ukraine, Hungary, Russia as all the borders back then oozed around with each war or treaty making the search even more difficult. Add in hearing the name of the town your grandmother thought they might have come from ....said in a Southern accent it loses something in translation. And, she was never sure as her parents were too busy making a living and raising children to talk about the real Old Country. Any knowledge of names of siblings who lived "up north" that they would go visit during the hot, humid summers before AC in Florida was lumped under the phrase "family up in Philly" or "relatives up north" and that makes finding more information hard.

In the span of less than two generations many a Wolf (Velvel or Zev usually) left Russia, boarded a boat for England...stayed a bit in England or moved on quickly. If people had resources (money) they moved further inland and traveled to places where they could find their fortune or just put nice clothes on their children and food on the table. If they had less money they tended to stay put in England or wherever they landed in Philadelphia, Baltimore or New York. If they had a friend or a cousin who told them of opportunity somewhere they left for somewhere... and there the branches became broken.

There was no Facebook... Whats App or Facetime... people simply lost touch busy in the every day realities of life. Someone passed on, someone moved away, someone lost touch and women got married and went off to wherever the man wanted to go. Not a political statement, just the reality of life in 1880. Names changed in America and sometimes a son-in-law even took the father-in-law's name for various reasons.

From 1876 until 1926 a woman in Russia could have traveled to England, then on to Philadelphia, lived in Key West and ended up buried in Galveston.

I always wondered what it must have been like for my Great Grandma Ida who had not seen movies, TV or National Geographic Magazines to arrive by boat to the Mallory Docks and see Key West for the first time coming from "somewhere in Russia" as each time I return from Miami I'm awed by he tropical beauty and I"m from Miami.

Commodore Ralph Munroe writes in his book of his first impressions of Key West in the late 1870s when he'd sail in on his sailboat. 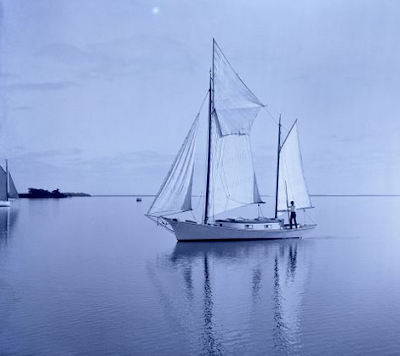 "Key West Light under the north star," bought us to anchorage.

And here, at last, was Florida; here the Gulf Stream, the coral reefs, the exotic island town under the moon. The glint of moonlight on pinnated palm leaves, waving in the fresh breeze, and on ruffled waters, the occasional clear flutelike note of some fish under the vessel's bottom" "impressible odors of a tropical town-- fruit, fish, flowers, tobacco and wood-smoke-- barking of dogs, the crowing of roosters and the splashing of fish, taken all together, made an impression both weird and delightful, and never to be forgotten"

I'm guessing that's how it looked to Wolfe and Ida in the 1880s. 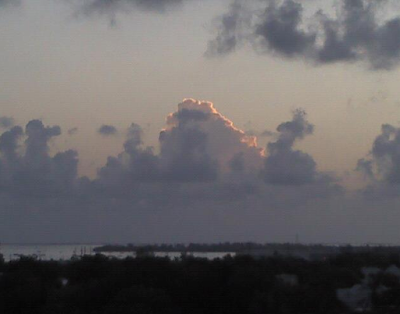 In ways the sunrise and sunset still looks the same in Key West and when I walk down Whitehead Street I am forever amazed at how the flowers mingle in the trees climbing up towards the deep blue sky and you can smell the scents of it all mingled together as a chicken runs across the road and some tourist nearby goes off in chase of the chicken trying to get a picture to post online of "Chickens in Key West" and amazingly my brother has left me on many a corner taking a picture of a chicken crossing Whitehead Street. Probably much like Great Uncle Morris and Jake ran off to watch the photographer taking pictures.

As much as I walk down the streets in Key West and remember the stories about how the Jewish Community had Jose Marti speak and raised money for his fight for independence ...and the cisterns they had to use to collect water...as there was no running water.. I'm always in AWE of the fact that they helped start the first Jewish Synagogue in Key West now named Bnai Zion. I was there at the 120th anniversary celebration during Chanukah 2007. The picture below is of children today celebrating Chanukah at Bnai Zion. Nice to leave a legacy. Before that families prayed in different homes, including my great-grandparents, until they could have their own home. Key West was home to many people of different cultures, offering everyone a chance for a golden future and a beautiful sunset at the end of every day...at the end of the road. 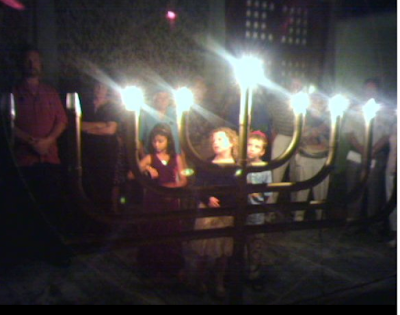 If you are ever in Key West... visit, it's a beautiful place.

I'll be blogging my adventure looking back into the past to find my family history. Not all posts will be so long however I can't promise many won't as I seem to be a long read when I am not posting pictures or music which I often do on my hurricaneharbor.blogspot.com.

Key West today... my family's "old country" in America as seen through the lens of the photographer visiting town.  "Uncle Jake" and his motley crew caught in the scene. 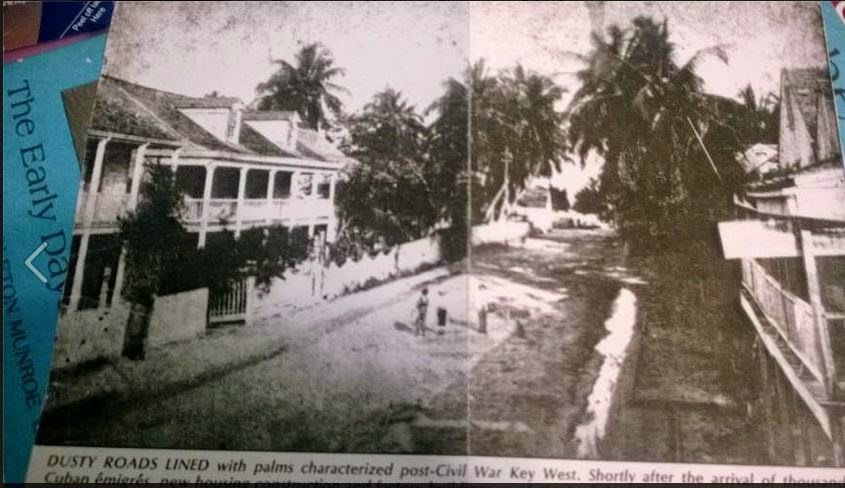 Whitehead Street as it looks today. 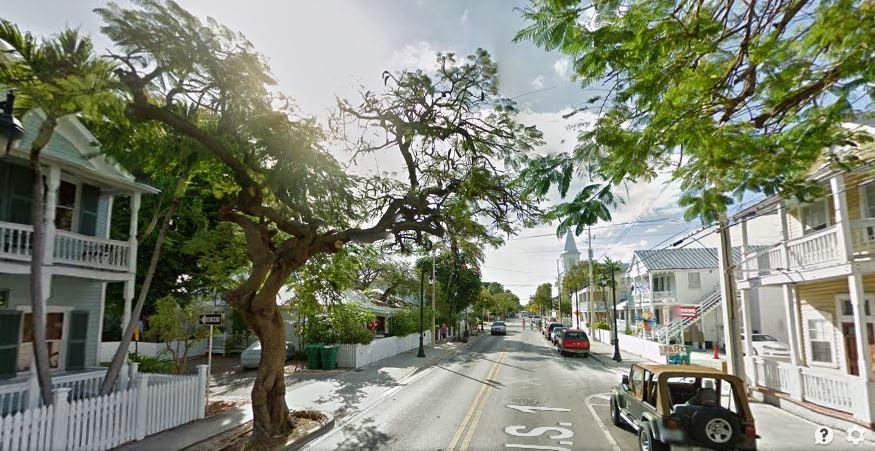 I show this picture as on the left you can see the small Lane. It became known as Aronowitz Lane. Story goes that the sisters from St. Marys would come to my Great Grandmother's house and get Ida to go help birth babies as the Romanian immigrants who lived down that Lane were afraid of the nuns and would only let them into the house if there was an emergency if they came with Ida. It seems Ida had bouts of bronchitis like I get and she nursed her back to health several times at the hospital in the convent. They developed a friendship of respect and she would often assist them when a woman was in danger during a long, hard labor.

I always heard that story growing up. When you are there and make a turn down the lane and look  at the homes history comes alive and stories make more sense. 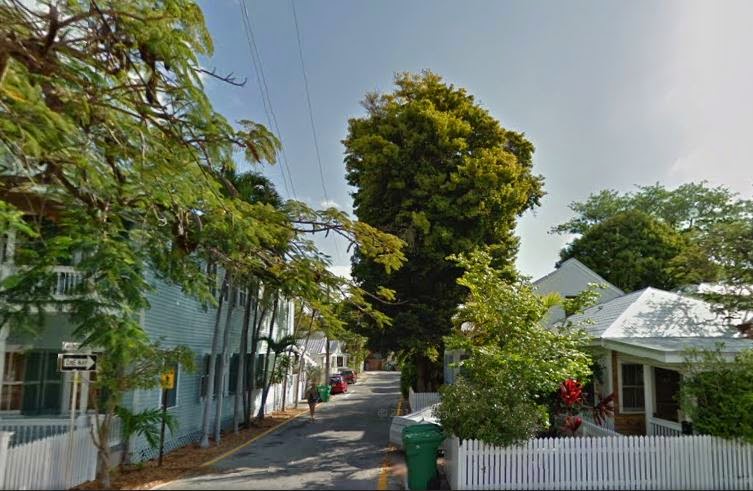 Thanks for reading. I'll be updating this blog with more information on Key West Jewish History. Suffice it to say it starts with the formation of a Rodeph Shalom Synagogue that became Bnai Zion. When Ida and Wolf lived there they had a Sefer Torah and they moved it into different homes including theirs for services. They helped found that Temple as well as the one in Tampa with the same name... for many the cemetery in Key West was truly the end of the road for many European Jews who had made the trip to America. Ida and Wolf are buried in Tampa.

Be well and feel free to contact me with any thoughts, advice or information.

BobbiStorm
Weather Historian. Studied meteorology and geography at FIU. Been quoted in Wall Street Journal, Washington Post & everywhere else... Lecturer, stormchaser, writer, dancer. If it's tropical it's topical ... covering the weather & musing on life. Follow me on Twitter @ https://twitter.com/#!/BobbiStorm